skip to main | skip to sidebar

Law of the Land

One of the reasons I love to travel is that I learn a lot about other people and places.  A Zimbabwean guide I met in Africa had a mantra he repeated to us: "learning and discovery."  Just two months ago I spent a month in Australia and learned some of their history.  It bears an uncanny resemblence to American history, especially regarding natives who lived there before the Europeans arrived.

Australia's aborigines are thought to have lived on that continent for as long as 60,000 years.  Their artwork is phenomenal and is the oldest continuous art tradition in the world.  Here is one such rock painting depicting lightning man: 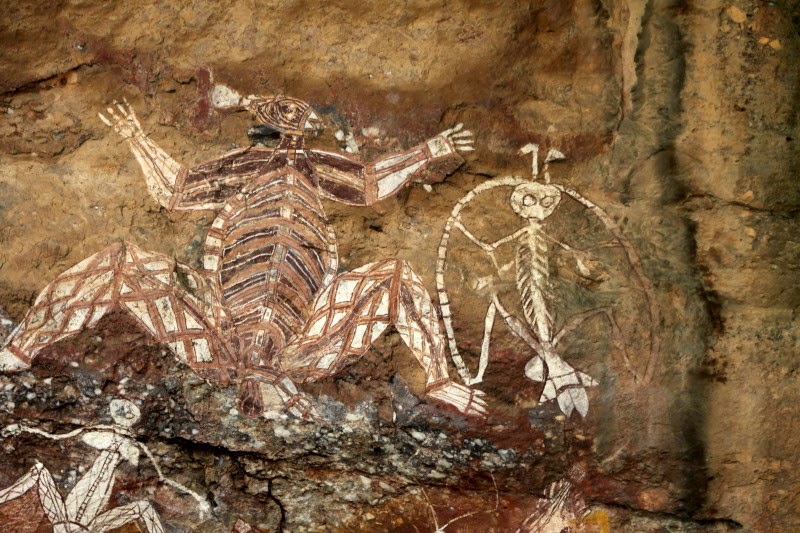 They adapted to a harsh, dry enviroment and employed nearly every plant and animal for food, medicine or tools.  Over time, hundreds of original clans had specific territories.  There were many languages as well, many of them now lost.  (see http://www.healthinfonet.ecu.edu.au/map-aboriginal-australia for a map done in 1996 of the language groups' territories.)

Yet when Captain Cook 'claimed' Australia in 1770 and the English later used it as a penal colony starting in 1788, the land was sparsely populated.   That along with sheer imperialism led to a legal concept known as ' terra nullius'--land owned by no one.  This justified an entire continent's theft.  Sound familiar?

Just like our own Native Americans, Australian Aboriginal customs of land ownership were more tribal or clan-oriented.  Their concept of land ownership was ancestral, spiritual and respectful.  They neither had a written language nor a history evolving from feudal land rights.  And sadly, they did not have the weaponry to defend it.  As a result, the Aboriginals' lands were taken; their rights ignored; and their basic humanity denied.  There were lost generations of Aborigines who were taken from their parents and raised 'white.'  (The 2012 movie "The Sapphires" tells one such story.)

Not until 1962 were Aboriginals given the right to vote and in 1967, they were counted in the census.  But even in the 1970's, the courts still declined to overrule the medieval 'terra nullius' doctrine.  This tragic history is well captured in Thomas Keneally's book, "The Chant of Jimmy Blacksmith," also a movie.  Finally, in 1992, in Mabo v Queensland the High Court of Australia struck down this insidious rule.  It is not easy for Aboriginals to re-claim their ancestral lands but at least the law permits it now.

We visited Kakadu Park, which is east of Darwin in the top end of Australia.  We floated on the yellow waters of the misnamed Alligator River watershed (blame a Yank for that one.)  The park is now Aboriginal owned and one of our river guides is one.  She told us how many of the birds, fish and crocodiles were eaten or used by her people.  Later, we camped in the desert lands surrounding Uluru (aka Ayers Rock) and walked with an Abo guide who explained the medicinal value of the seemingly dry and useless plants on her land, values scientists are only slowly studying.

'Learning and discovery:'  It is a good thing that the legal rights and ancestral knowledge of the First Peoples of our planet are on the rebound.
Posted by Bob Goldsmith at 12:21 PM 3 comments:

Bob Goldsmith
Seattle, Washington, United States
I have been a lawyer for 35 years. In 1978 I graduated from the University of Wisconsin law school. I started in Chicago with an environmental public interest group, focussing on federal court litigation of environmental and civil rights cases. In 1981 I came to Seattle, and from 1982 through 1990, I was a staff attorney at the Seattle King County Public Defender Association. In my last two years there, I was the training coordinator, teaching new lawyers how to defend. Since 1990 I have been in a solo law practice in Seattle. I have been admitted to practice in Washington, Wisconsin and Illinois. Listed in SeattleMET as one of the best lawyers in 2010. http://www.seattlemet.com/issues/archives/articles/lawyers2010/16/ Since 2000, I have been an adjunct professor of criminal trial practice at Seattle University Law School. See my website: bobgoldsmith.com for more info, or read blog on the SeattlePI: http://blog.seattlepi.com/defenseattorney/